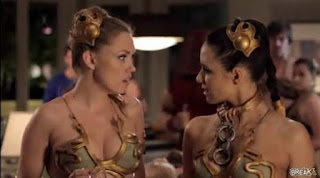 Breaking out of Hiatus For Just a Moment 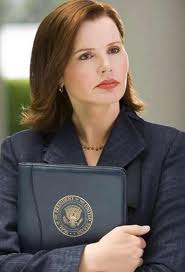 *pretends to be Dwight from The Office* "Unshun"

I swore I wouldn't break my hiatus for anything, not even when this massive slew of female-lead action movies was released this spring...RIGHT after I went on hiatus. But this is too good not to share.

If Geena Davis says it's true and brings it to our attention, can all my fellow fangirls out there PLEASE stop giving me the business for pointing out gender inequalities in film? I mean come on...it's GEENA DAVIS! Can we stop yelling at each other and just acknowledge this?

I've tried to explain it a trillion times. I'm not anti-sexy, I'm just tired of "sexy" being the only option for actresses to play. This topic played a huge part in what I like to call "SlaveLeiaGate 2010". A lot of Slave Leia cosplayers wrote me really gnarly emails saying I was a woman-hater. I was just pointing out the disproportionate amount of Slave Leias at conventions, and how almost all the costumes are designed to appeal to the male eye.

As a lady geek, I just get tired of it...why do all the men get to be costumed in a very practical way while the women have to look like prostitutes? Now Geena Davis is hunting down the facts and statistics to prove some of what I've been saying for a long time. And well, it just makes me feel like saying, "Told you so!" (I'm such a good sport, right?) I'm just SO glad the conversation is changing.

READ MY PRE_RELEASE THOUGHTS ON "SUCKER PUNCH" HERE
(That one also kind of makes me want to say "Told you so!")

I'll be back when I finish my Master's Degree in a month...or not. Maybe I'll be too busy living a new dream. Who can say where life will take us? 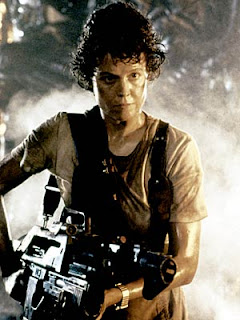 There's a lot of exciting action heroine news happening out there in the world. Sucker Punch is about to come out, a new Wonder Woman has finally been cast, and there's more news than you can shake a stick at. (Though I don't know why you'd want to do that.)

However, I'm taking a hiatus while I finish my thesis and before I jump back into the world of writing again at full speed this summer.
It's been tough not having the time to comment and write reviews on all the exciting news. So I look forward to returning as soon as possible. Until then, here's to the paradigm-smashing women of strength coming at you from TV screens, movie theaters, and comic books everywhere. In the meantime, remember to check out all the archives located directly to your right in the blog sidebar. Feel free to comment and debate all you wish.
Posted by Audrey Brown at 11:14 AM No comments: