The Case for Cutthroat Island 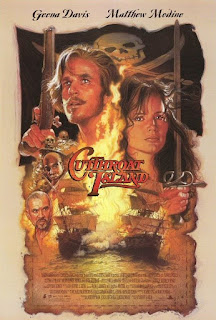 Geena Davis is a legend in the world of action. Yet, some of her action films were widely panned at the box office. Many are known today through "cult classic" status. I don't know why that is, so I'm gonna break it down in defense of Cutthroat Island here.

Cutthroat Island is just about as concentrated a pirate film as you will ever find. Within the first three minutes, we’re treated to a double-cross, a lavish horse-riding on the beach scene, plank-walking, and such pirate iconography as a skull and cross bones, a monkey, a map, and a peg leg...

Within the first six minutes, we have our first underwater scene. For the rest of the film, we're treated to lush tropical scenery, impressive stunts, huge caverns full of Spanish treasure, authentic period costuming, Fairbanksian antics, and some very large, very amazing ships. Let’s not forget one seriously huge explosion at the climax. It’s the stuff pirate geeks’ dreams are made of, and this movie plays out like a veritable “best of” reel of pirate standards, visuals, ideas, scenes, and characters. This makes the mystery of its failure all the more intriguing to me.

To date, Cutthroat Island is the biggest financial loss ever posted by a film, so sayeth the Guinness Book of World Records. It bankrupted the production company behind it, Carolco Pictures, the company also responsible for the first Terminator movie. Perhaps it was an unwilling public in 1995 that killed the film. Some films released around the same time were Father of the Bride II, Sabrina, Sense and Sensibility, Grumpier Old Men, and the closest thing to a fantasy adventure was Jumanji.

This was pre-Lord of the Rings, before new life had been breathed into the action/adventure/fantasy genres. Cutthroat Island was like the new kid in some small Midwestern town, wearing clothes that nobody had seen yet but that would be popular in a few years time.

This was also post-Alien and pre-Tomb Raider, so a woman at the center of an action film may still have been an oddity for some people. Though the ratio of male driven action films is still far larger than those of female driven action films, by a ridiculously large margin, the general public is now well acquainted with the action heroine. That was not the case in 1995. And as far as a movie about Pirates…it seemed laughable at the time. It would be eight years before pirates were “in” again with masses of moviegoers thanks to Disney.

Today, movie fans are more acquainted with the “making of” process to a film. We can track news about upcoming and underway film productions via websites like Aintitcool.com. We can hear what the directors are saying as they are making the film, and even see YouTube videos about what’s going on during the filming. 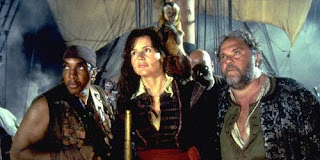 There are ways now for fans of fantasy and adventure epics to support the making for the entire duration, even just via word of mouth. But in the mid-90’s, the internet was still fairly new and the production of Cutthroat Island was essentially isolated. So the massive (and impressively independent) undertaking of CI’s production went unappreciated and built no buzz or excitement. By the film’s release, it’s entirely possible that a few bad reviews by some critics who had gone too many years without having fun at the box office had the power to kill the film.

You may think I’m blinded by my love of all things pirate, but I can make a few concessions about the film. It’s far from perfect. It’s a little slow in segments and perhaps a touch too long, but these are qualities typical of all escapist movies. Try sitting through a Bollywood musical or any Bruckheimer movie without going to the bathroom. I dare you.

Also, there are some real whoppers of one-liners coming from the film’s central villain, played by Frank Langella, who doesn’t make the most convincing pirate. Though he seems to give it his all, and is good at being despicable and making mean faces, which in my book, he makes up for a distinct lack of pirate-ness. There are some early 90’s comic touches that may not have aged very well. And in keeping with the pattern of a movie featuring a monkey, there is a lot of time spent with said monkey. Nothing approaching Anaconda or Outbreak levels of screen time, not even close.

The sheer concentrated nature of this movie is what makes it great, what gives it the ability to rise above its flaws. This is an action film. A long, violent, exploding action film! It’s every bit as exciting (and delightfully implausible) as the Die Hard films, and yet it’s treated as something to be embarrassed about liking, whereas Die Hard is treated like a timeless classic.

I want to talk about Geena Davis. She is easily one of the single most under-appreciated actresses ever by film geek standards. Pirate lovers should be ashamed of themselves for ignoring her. You can’t talk about Cutthroat Island without talking about her. Davis has a hugely significant role in film history. Aside from her diverse career, she also has a place as one of the most notable women of the action genre. 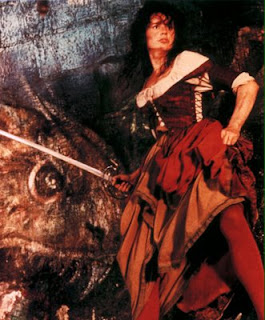 It’s not often that a woman gets to star in an action film, though far more common today than it was when she was starring in movies like the uber-violent Christmas classis (Yeah, I said classic) The Long Kiss Goodnight.

Again, Davis was working in the "women of action gap”, midway through Sigourney Weaver’s amazing performances as “Ripley” in the Alien films and pre-Angelina Jolie in Tomb Raider. (Which was the only movie at the time to make as much money as Alien did upon its release. Yes, there was a 22 year gap in history between leading women in a financially well-performing action flick.)

As Captain Morgan Adams, Davis positively soars. She’s so convincing as a violent pirate, I’d wager she could defeat any other fictional pirate ever featured onscreen.

The character of Morgan dresses for practicality, unlike many other onscreen heroines who end up in a leotard or a Halloween costume for the duration of their story. She handles tough dialogue well. Dialogue like, “Open fire” and “Hoist our colors” that would sound outrageous delivered in any other way. It may seem silly to suggest that playing a pirate can be a dignified thing, but Davis brought her natural dignity onto the set, and it was a credit to the film.

They’re not just playing with gender stereotypes in Cutthroat Island, they’re reversing them and are willing to pay up on that idea all way through the film. Davis takes on the role of what would be the traditional leading male character. The film stays self-aware that mass audiences will be hard-pressed to accept a lady as a pirate captain, addressing it several times through plot.

The one man who directly propositions Morgan for sex in the film is very quickly stabbed by the tip of Morgan’s knife as she tells him quite unemotionally, “Now leave this place and go far away.” If Davis was the leading man, then Matthew Modine became every bit the stereotypical “damsel in distress”. It is Modine’s character, Mr. Shaw, who is kidnapped, held hostage, in constant danger, and in need of rescuing throughout the film.

With the still resounding success of the Disney “Pirates” franchise, one simply must take a second look at Cutthroat Island today. Oh sure, it’s cool now to make a pirate movie. But for years upon years, pirate movies were to the silver screen what the Scottish play (MacBeth) is to theater. A cursed endeavor, a sure financial failure, and something few people wanted to see.

So in that sense, Cutthroat Island and its producer/director Renny Harlin, deserve a lot of credit. Credit for showing the team at Disney that a large blockbuster pirate film could still be done. Even though there was no guarantee of success, such a feat could be accomplished. And despite its lack of financial gain, Cutthroat Island is just as much of a visually rich film treat as Disney’s efforts. It’s just as much fun to watch, and shares many plot points as well.

Your assignment, should you choose to accept it? Re-watch Cutthroat Island and give it a fair shake. Forget what you’ve heard about the film or what you yourself have said about it in the past. Watch with an open mind. You try to figure out why it flopped, and POTC soared. You try to figure out why you can’t find it at your local Blockbuster or Hollywood video or Wal-Mart. If you enjoy the movie, tell your friends, have a viewing party, buy it for your library and set it proudly on your shelf with Hook, The Goonies, and Disney’s Pirate films. Do what you can to de-stigmatize this excellent adventure flick.

If by the end, you aren’t convinced of this movie’s awesomeness, then you win. If you don’t like the huge explosion, the piratey goodness, the endless final battle, the saluting monkey…well, then I’ll concede. I’ll say it’s not for mainstream viewers. But you’ll never get me to say that I don’t LOVE this movie, and I’ll never stop recommending it. The box office may be a fickle thing, but people who love Pirates will always know a good pirate movie when they see one.

And Cutthroat Island is one fine example of a pirate movie.