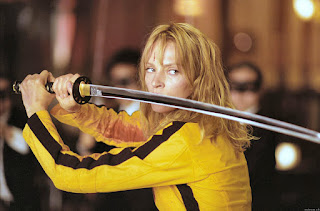 *This was originally written for an April 2009 ForcesofGeek.com column.*

This April marks the five year anniversary of the theatrical release of Kill Bill Vol. II. I know five year anniversaries aren’t too impressive, but that paired with the recently released trailer for Tarantino’s next film, “Inglourious Basterds” got me thinking about the Bride all over again.

Nothing prompts a good debate like mentioning the name “Tarantino” in a room full of movie geeks. I’d bet money the same debates will be heard all over again with the release of this next film. Why? Because his use of violence is so prolific. It manages to surpass even Coppola or Scorcese. I fear as this old debate gains new life, the Kill Bill movies will be put on the chopping block all over again.

I'm afraid they'll be underestimated, used as fodder for people who want to argue against violent films in a simplistic way, and lumped in with meaningless movies where they don’t belong. Believe it or not, there’s much more to the Kill Bill films than revenge.

Quentin Tarantino’s first installment of his homage to 1970’s revenge films was massive for the female-driven action genre. Despite it’s over the top gore and highly stylized appearance, this movie provided a wider spectrum of complex female characters than the majority of most populist movies. I don’t know if that says more about the movie itself or the lack of variety in roles for actresses today.

Contrary to how it may appear, most revenge films are not about female empowerment. They’re about getting people into theater seats to make money. But the Kill Bill films are different. Sure, they play on the old exploitation themes, and yes, that’s probably why a lot of people went to see them. But instead of being a voyeuristic thrill, these films are a man’s nightmare. They’re the complete opposite of the exploitation of women. The male characters are almost completely secondary, and they play less intelligent and shadier parts.

Women have been relegated to playing the powerless roles in cinema for so long, that when those roles did start to arrive, they came as overtly violent and powerful characters. (I’m thinking of Foxy Brown and the exploitation films of the 70’s as well.) Much like the beginnings of any change in perception of a people-group, the first rumbles sometimes come in the form of violent protest. Just ask the suffragettes who died for the right to vote. First wave feminism was a bloody, deadly affair. So are maternal protection urges, for that matter, but we'll get to that later. 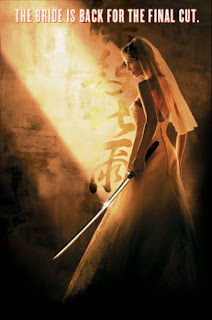 There's catharsis in the the pendulum swinging the other way. If the extreme portrayals of violence were not about how long women waited to be in the role of an action hero, then they are at least about the frequency of how often women get to play those roles. In the grand scheme of film, that's almost never.


Believe it or not, Kill Bill is about grief, loss, and pain. It could almost be considered a, “women’s film”, despite the fact that there are no montages of women grieving over a break-up and eating ice cream. (Ugh… so insulting.) But I honestly think, considering the theme, the Kill Bill movies qualify for airing on the Lifetime network.

For all the sword slashing and blood spurting, there are also moments of extreme tenderness, such as the moment in the hospital (Vol. I) when the Bride wakes up and realizes she has lost her baby.

There's a side to motherhood that can (and should) be vicious. This movie explores that concept. Mothers are often relegated to certain roles, even in today’s far more diverse films and television shows. They are typically secondary characters or women with stereotypical emotional problems who are clingy and unbalanced.

Brilliantly played by Uma Thurman, the Bride is a mother character who is such an extreme opposite of that stereotype, she could’ve been laughable. The concept is so concentrated, it could almost be considered a parody. Instead, Thurman’s performance takes the character to legitimate heights of hysterics and back again several times. But never simply to torture us.

Other revenge movies like, “I Spit On Your Grave” or the lesser known, “Eye For An Eye” have become legendary for their horrific and unnecessary depiction of violence against women. They’re too difficult to watch, let alone enjoy. The same can be said for many horror films. Many of them end up playing like fictional snuff films.

Kill Bill Vol. II also breaks ground for women, as it gives them their first realistic western starring a woman. (Update, I've since been schooled on this topic and it's not fair to call Vol. II the first.) In the sequel, the Bride's journey mirrors that of Clint Eastwood or John Wayne’s most iconic characters. They wandered the high plains, she navigates the brutal spaces of a woman tracking down her former abusers. Yet somehow, the outcry that the Kill Bill films were more tasteless or offensive permeated many reviews that came out at the time.

Yes, I realize I’m saying a Quentin Tarantino film is realistic. What I mean is that it’s not romanticized in the same (sometimes patronizing) way that “Bad Girls” or, “The Quick and the Dead” were. The violence is still there, and it’s uncomfortably real in some scenes. In Vol. II, The Bride is shot in the chest with rock salt, buried alive, and shot in the leg with a poison dart. And it's not played for laughs or as an isolated incident for shock factor near the end of the film.

Movies often go on to depict victimized woman as permanently traumatized or hysterical. Movies like “The Brave One” portray their mental breakdowns post-attack, thus effectively ruining the illusion that our heroine has any sense of control over her own strength. Those movies often feel like long slow death marches, not only for our leading women, but also for us. Who wants to go sit at the movies and watch someone be victimized, only to lose their mind and spin out of control? To become a victim yet again.

The Bride gives us calculated revenge, thoughtful analysis at each and every step, and she ultimately keeps her cool no matter what happens to her. In this way the movie works as a metaphor for motherhood and a breakthrough for victimized characters in film.

Yes I know, it’s a very colorful and unrealistic metaphor. But so are most fairy tales and romantic comedies, and we still accept those. The Kill Bill films take visceral female fears such as heartbreak, weddings, marriage, babies, and give them the same treatment that most action films give to male fears of commitment and intimacy. Despite being a victim of other people’s actions, the Bride does not simply allow herself to stay helpless. It’s Dirty Harry for women, and it was about time.