Marion Ravenwood is not the toughest of the action heroines. Lara Croft or Leia Organa might be able to out-gun her and Ripley from Alien or the Bride from the Kill Bill films could probably have her beat in brute strength and special skills.

But nobody, and I mean nobody, beats her in feistiness. She’s tops in the will-to-live department. She owns the, “I don’t care who you are, I’ll punch you square in the jaw” category.

No character since Raiders of the Lost Ark has taken the same approach that she did of getting through the adventure she was unwittingly pulled into. In a way, she’s the survivalist role model for all action heroines. Because Marion never set out to take down an evil empire or save the day, she doesn’t have any ulterior motives in her toughness. She just wants to live and she doesn’t want to be pushed around.

Sure, Marion Ravenwood is written to be a tribute to some of the dames of movies gone by, but she’s also very original. For anyone in my generation (the millennials), she was one of, if not the first, feisty women we’d ever laid eyes on in a film. She was completely original to those of us who didn’t realize that Marion, and in fact the whole of Raiders of the Lost Ark was an homage to the old serial adventures from the 1930’s. If you put her up next to many of the leading ladies of today’s action films, she’s still a one of a kind. It’s odd that a character constructed to be a tribute could still seem so non-formulaic and modern.

She may have been one of the first leading ladies of the action genre that gave women a reason to come to a film because there was a character that was a part of the adventure with whom they could identify. As attractive as she was, Marion wasn’t simply eye candy. As much as we loved to watch our hero, Indiana Jones, Marion Ravenwood was equally admirable. Especially for those of us who watched her when we were little girls.

I do believe that old Fred Astaire quote is relevant in this circumstance in regards to what Ginger Rogers had to do in order to dance with him, “She has to do everything that I do backwards and in heels”. So it was with Karen Allen, who went into a pit of snakes, a sweltering airplane, a tomb full of corpses…just to name a few set-ups, wearing nothing but a gauzy white ball gown and either toeless heels or bare feet. Tell me, who had to be more brave in those situations, the man with the gun and the whip, covered from head to toe, or the barefoot
lady in a backless dress?

One of her greatest strengths is that she’s in touch with her anger. She gets mad, a lot, and rightfully so. In fact, she is so frequently annoyed with the men in her life and how they complicate it that she isn’t afraid to express her feelings at all times and under any circumstances.

There is nothing tragically stifled about her, and she doesn’t suffer from that ivory tower syndrome that so many leading ladies seem to be written with. (Not that it’s an entirely bad quality story-wise; it can be an interesting character trait.) Marion is refreshingly expressive compared to many damsels in distress. She lets it all out, and she knows who she blames for her circumstances. She blames Indy for breaking her heart, her father (Abner Ravenwood) for leaving her stranded in Nepal, and whoever has their hands on her when she has not given them her permission.

This is also where that survivalist mentality kicks in, because when Indy finds her stranded in Nepal, she’s not wasting away. She’s flourishing, even under circumstances that she hates. She’s a business owner, she’s winning drinking contests with men twice her size, and she’s not under any kind of false illusions about who she is and what she wants.

She slaps, she yells, she screams, she punches, and she even hits someone over the head with a frying pan. But she plays it completely straight. There’s nothing simpering about her, even when she’s screaming for Indy’s help…she still sounds strong and demanding. There may be a touch of impatience, but hey, if you were being carted away in a basket by a gang of strangers, you might be a little testy too.

Marion never asks anyone for permission for anything. She joins the adventure on her own terms, naming herself a partner in order to protect her investment (her father’s medal). Instead of waiting for Indy to save her in the tent at Tanis when she’s been captured by Nazis, she comes up with her own escape plan.

It should also be noted that even when she’s put through the ringer, she doesn’t stay down for long. She’s easily one of the most resilient action heroines of all time, especially toward the end of the film. She gets kidnapped, thrown into a pit of snakes, assaulted by corpses and then manages to have enough wits about her to hi-jack a plane. Even though it doesn’t go picture perfect for her, she was sharp enough to come up with the idea and brave enough to take the risk to do it. Now that’s resourceful. Leia typically had a team of people to command to help her accomplish what she needed to get done, Marion was just half of a team of exhausted people trying to stay alive.

Marion’s decisions also affect the story, which is a rare quality for leading ladies. Many times women in film are counted upon to “ooh” and “ah”, but never to take any actions that lead to their own salvation or the resolution of the plot. But Allen as Ravenwood convincingly takes charge of her own situations as often as she can. This sometimes puts her in more danger and sometimes ends up saving her life.

For example, if she had sat passively in the tent at Tanis, what would’ve become of her when the Nazis raided the boat she was on? She likely would’ve been executed. Instead, she cleverly took the time to acquaint herself with her captors, making her harder to kill later. However, if she had just given Abner’s medal to Indy at the beginning of the movie, she wouldn’t have been exposed to any danger at all. I’m convinced that she could’ve asked him to fly her back to America and he would’ve done it and continued on by himself. But she wanted to be involved. 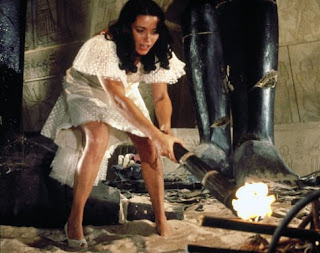 Even though the character is written in such an unforgettable way, it was Karen Allen’s performance that sent Ravenwood skyrocketing into my memory as a cinematic role model. What could’ve just been a likeable character has now become legendary to film geeks and a good example to women everywhere. She redefined what was permissible for a leading lady, and as a character, she has the ability to make you stop and take stock of the areas in your life where you could stand to use a little more gumption.
Posted by Audrey Brown at 4:15 PM