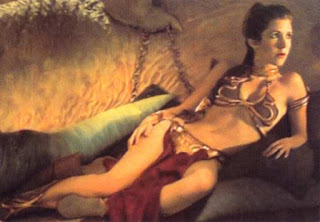 Princess Leia is famous the world over for many of her finer character traits. There’s the fact that she wields a blaster with deadly accuracy, she’s a better leader than most of the men she’s surrounded with, and she’s highly assertive. Leia even sets some cinematic feminist standards for the way that she prioritizes. Her fight against the Empire comes first, her crush on Han Solo comes second. Resisting Han? Now that’s devotion.

Visually, she has some instantly recognizable trademarks. There’s the intricate hairstyles, the flowing white robe from the first film, and her winter Hoth get-up. But I bet when I say the words “Princess Leia”, one thing comes to mind first. The golden slave girl bikini. This costume, featured in the Jabba’s Palace and Sail Barge sequences of Return of the Jedi, is probably the single most popular costume among lady geeks today. But unlike Leia’s innocuous trademark buns, (insert rim shot here) that bikini holds extra significance.

It’s legendary on the convention scene and around Halloween. It’s by far and away the single most popular costume for lady Star Wars geeks the world over. Of course, I don’t have the stats to prove that. But chances are, if you’re reading something on this website, you know exactly what I’m talking about...

Don’t get me wrong, I’m no prude. As someone who loves female action heroines and comics in general, I’m no stranger to women taking charge in any number of strange costumes. Different universes allow for different costume variations. Marvel seems to fancy the spandex suit angle. DC does a decent job of convincing me that animal costumes can strike fear into the heart of any criminal. Hey, the Black Canary is perfectly fit to fight crime wearing a leotard and fishnet stockings, with her hair down, usually while riding a motorcycle. So…

But there’s just something so jarring about the prominence of Leia’s bikini in geek culture today. Yes I know, Jabba made her wear it. And yes, I think that Carrie Fisher looks fantastic in it. I’m not arguing with that. But seeing a million carbon copies of her running around all over the place looking like they could be coming right off the pages of Playboy magazine is just too much for me sometimes. After all, Leia looks miserable in that outfit for the entire duration that she has to wear it. It’s the closest she comes to being a victim in the entire trilogy. She’s obviously humiliated, and I’ve never once seen her making that “come hither” magazine cover face that I seem to see in so many fangirl photos.

As someone who loves the character of Leia and sees her as a role model, I resent that women wear that costume like a badge of honor. I know that statement makes me like a geek deserter and believe me it’s my least popular opinion, but it’s honestly how I feel. 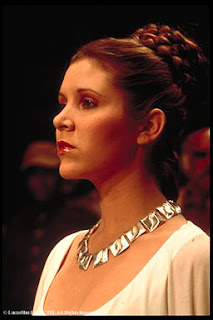 I resent it because of what it has become for lady geeks today…an easy way to get attention. It’s counter-intuitive to our very nature as lady geeks. We’re notoriously snobby about not getting attention in easy ways. If all we wanted was attention, we’d just do whatever it takes to fit in with majority culture and suppress our deepest desires to discuss lightsabers and droids.

But that’s not us. We want knowledge, we crave expertise, we like to appreciate things and obsess over small details.

I’d like to think that a true lady geek would take an unhealthy interest in recreating the details of any other Leia costume, rather than go get the easy-to-find slave girl rental outfit. And some do. If you simply must wear it, at least have the decency to make it a labor of love. After all, there are women out there who do an incredible job faithfully recreating the details of the bikini. I’m highly impressed with their mad geek skills. Honest.

As a matter of fact, any woman who dons the world’s most recognizable bikini without knowing the significance of what she’s wearing disrespects all the women out there who do get it. If you don’t know what “Alderaan” is, put the bikini down and back away.

I know sometimes being a lady geek is a business nowadays. It’s still a world dominated by men, and yeah…we get patronized. A lot. I’ve spent my fair share of time proving my worth on any number of pet geek topics to men who seemed to think that I only got into Star Wars or comics to meet guys. (Which is really funny when you stop and think about it.) But we don’t have to wear low cut tops and short skirts to gain attention in the geekosphere. Well, for attention that definitely works, but for respect…that’s a whole other matter.

Let me be clear, I am not anti-costume and I am not anti-sexy. I’ve donned the occasional outfit for first showings of geek standards and Halloween parties. I love costumes. I just resent the fact that out of all of Leia’s actions from the entire Star Wars trilogy, this is the moment that has been removed and sanctified.

That would be like the majority of male Star Wars geeks wearing a diaper and saying that they were dressed as Luke from the Bacta tank. But they wouldn’t do that, because it wouldn’t get them any attention. Because women don’t find men in diapers attractive…and now I’m getting off topic.

It’s true, Leia killed Jabba in this outfit, so it’s not entirely without significance. But you rarely see anyone dressed up like Hoth Leia or coronation Leia. It’s mostly just that blasted bikini. And if a gal can get away with it, I guess I’m required to say the obligatory, “more power to her”.
But what I want lady geeks to understand is that they don’t HAVE to do it. They can get attention in so many other ways; the ratio of male to female geeks alone will see to that.

The slave girl bikini has become the equivalent to the ubiquitous trampy Halloween costume and I just feel like Leia, and Star Wars on the whole, deserve more respect than that. I’d rather see a woman in a camouflage poncho with a blaster at her side than half-naked with a chain around her neck.

But I’m just a lady geek, so I guess that explains that.