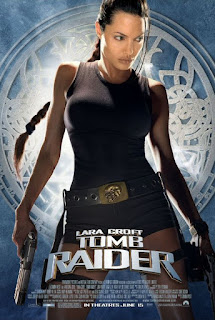 With the ever present possibility of a Tomb Raider reboot and the steady release of new games, I’m consistently reminded of the significance of the character of Lara Croft.

And just how divisive she can be in geek world.

Even outside of discussions on whether or not the first two movies were “good”, there’s a lot to consider.

(For the record, I thought the first one was action/adventure fun and the second one…may have been a little too Bond for me. And yes, it might echo Indiana Jones, but guess what? Indiana Jones itself was an exercise in echoing a whole set of other films. But I digress.)

I saw the first Tomb Raider movie the summer it was released, the night it was released in fact, with my best friend. I still have my ticket stub tucked away in my wallet. Female heroes have always been slim pickings for women who love action movies.

In fact, the last action movie to hit it big at the box office before Tomb Raider that was headlined by a woman was 1986’s Aliens. Needless to say, we were really really excited. A huge summer blockbuster like this starring a woman was unprecedented at the time...

Thankfully, we have more to choose from today, but not by much. That’s why I think so many characters like Princess Leia have become so iconic. They come few and far between, so those of us that love that kind of thing have to cherish what we can get.

With all the reflective discussions going on in the wake of the constant remake rumble, I think people are forgetting to look at the reasons behind why the movie was so huge in the first place. Women want their own action movies and that movie was the start of a new wave of female driven action flicks. We’d experienced heroism in the past in figures like the incredible Marion Ravenwood and a few others. But this was a completely new version of a female hero, one completely independent of a main male storyline.

I remember seeing clips from the world premiere of Tomb Raider on TV before it opened nationwide, where teen girls were lined up on the red carpet and screaming their heads off for Angelina Jolie. That image will always be etched in my mind, because I had never seen a moment like that before. There were no pop stars there, or famous teen boys, or Disney icons. It showed that both grown women and young girls really do want to see action heroines. They can get excited about something that has nothing to do with their hormones. Laugh if you want, but when I went to see it, I was absolutely amazed.

The movie didn’t contain a significant love story vital to the plot and there were no love scenes. In fact, it was almost the polar opposite of a Bond film in that the biggest “nearly nude” scene belonged to Daniel Craig. It’s almost like he played a Bond girl before he played Bond.

All of the sudden I knew what little boys all around the world must’ve felt like when they saw Indiana Jones crack his whip for the first time. I wanted to be Lara Croft when I grew up, despite the fact that I was already 18. This was just a movie about one woman who had to save the world. Simple as that, and she wasn’t a bimbo. She was smart, disciplined, and composed. Her character wasn’t affected by her physical image, significant though it was. She was who she was, noticeable figure or no.


It was only after the movie that I started in with the games, which I still love today. But the games can present an even bigger challenge for women than the movie, as the character in the gaming world is so obviously built to appeal to the male eye. Does it make a woman a sell-out, an anti-feminist, a deserter…if she can love the character of Lara Croft?

Thanks to the glory that is Netflix, I was watching the documentary Searching for Debra Winger one random day. The movie is all about women in the film industry. It’s about age, power, motherhood, what roles are available, etcetera. 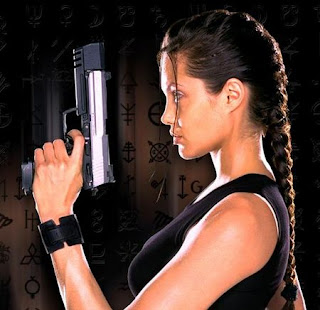 In one particular scene, Rosanna Arquette is standing next to Roger Ebert during the 2001 Cannes Film Festival, and directly behind them is a giant poster of Lara Croft. Ebert, who I love, didn’t miss the chance to talk about how he feels actresses don’t get a large enough variety of roles. But then he went on to say something I disagree with in total. “They’re [women] made into substitute men. I mean look at this,” he said sarcastically, gesturing to the poster, “this is the kind of women they want in the movies now, is somebody really tough, who’s gonna kill everyone.”

For a while in my life, I didn’t tell myself that I couldn’t do things. I went through a “Lara” phase. I would think, “Lara could do this, so can I”. I ran a half marathon, then a full marathon and I just began to start taking advantage of life. That character gave me license to do the things I really wanted to do. You’re only as brave as you pretend to be, and there’s no braver character that I can think of, in that summer blockbuster way, than Lara Croft. That’s the power of an action heroine for women, to inspire. It gave me the same giddy feeling that I had as a kid when I was running around pretending to be She-Ra.

That’s what I hope they remember if they reboot the franchise. Even though this is “just” a video game movie, it means something to lots of us lady geeks. We love Lara, we care about her. Personally, I don’t want a reboot. I want to see Angelina Jolie back one more time, though there seems to be a plethora of great choices out there should she decline.

Let the character go to Egypt once and for all. Let’s not try too hard to avoid the clichés, after all, the game is made up of some really fun clichés. Just take your time and do it right, and don’t let Jan DeBont near the set. Spend some more time on the script, and reference the game more often with more puzzle sequences and acrobatics and less fighting and relationship drama.

Explore the mansion. Make it a mystery. Tweak the adventure to action ratio a bit in the favor of adventure. But whatever you do, take good care of Lara. Treat her with respect, and we’ll show up. Time and time again. I know I will.