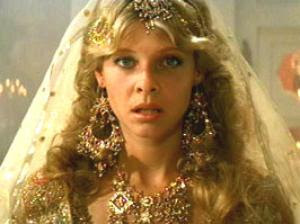 On behalf of Willie Scott, may I request that everyone please stop referring to her as, “the worst Indy girl”? Not that I feel like such a title is necessary when it comes to the three women featured in the Indiana Jones films, but if such a title did exist, should it not go to the greedy Nazi sympathizer trying to steal and profit from a holy artifact? I thought so.

I think that Willie Scott just might be one of the single most misunderstood film characters of all time. After all, when Lara Croft shows up, most people immediately sniff and say, "Hmph, like anyone could possibly be that tough." Yeah...I've heard 'em say, "hmph".

Willie Scott is essentially the personification of the action heroine’s rebuttal to the phrase “That could never happen in real life.” She gives us a healthy dose of realism via her vocal chords. Even Kate Capshaw was amazed at how much screaming she did. Capshaw talks about reading the script for the first time on the Bonus Materials DVD in the box set of Indiana Jones films, “…and then she screams, and then she screams. Hello? Can she do anything else besides scream?” (So please take a note, it was in the script. And if there simply must be a whipping boy, why not George Lucas or Steven Spielberg?)

Think of it like this, what if Judy Garland got dropped into the middle of “Treasure of the Sierra Madre”, because that’s essentially what happens to Willie Scott. The character is an entertainer, not an adventurer, so she’s completely and totally out of her element.

Therefore, her reactions are very realistic and they also provide comic relief. The story in, “Temple of Doom” is centered on incredibly dark subject matter. If Willie wasn’t along for the ride and reacting, it might just be too depressing to even watch. She also gives scale to the character of Indiana Jones. By watching Willie Scott be completely terrified by this adventure, we realize just exactly how good at handling a crisis Indiana Jones really is. She's our Rosetta Stone as film viewers for an action star that could feel too untouchable to be real. Though let's be honest...Jones takes his fair share of hard knocks in TOD.


So let's go with this. Just imagine that you get whisked out of your job one evening, put on a plane that crashes, forced to eat bugs, dragged through the Indian jungle, and then almost die a horrible death via a boiling hot lava pit. I bet you’d do an awful lot of screaming too.

Willie Scott is representing the normal ladies of the world, the big babies that could in no way, shape, form or fashion actually withstand a real life Indiana Jones adventure. She’s our advocate, our stand-in, and that makes the movie even more fun to watch, because we can picture ourselves in her shoes.

In fact, I’d put money down on the fact that if Marion Ravenwood had been put through the adventures in, “Temple of Doom” even she would’ve screamed her head off, despite her status as a legendarily tough dame. If Marion Ravenwood is Indy’s equal, then Willie Scott is his polar opposite, and she still made it out alive. Take that naysayers.

Also, Willie learns a thing or two along the way. By the end of the film, she’s pushing mine carts, climbing up a destroyed rope bridge, kicking the bad guys and even though she’s still scared, she might just be enjoying the thrill of the adventure a little bit.

I also want to point out what an excellent job Kate Capshaw did of making Willie Scott funny. She was perfect casting. If the tough guy act that Harrison Ford had to create needed to be over the top to be believable, than the comedy that Kate Capshaw had to bring to the table to exist in that world needed to be broad. If Karen Allen pulled off an Irene Dunn-like performance, than I definitely think that Kate Capshaw managed to give us something akin to a Lucille Ball. But such stylized comedy might not be immediately recognizable to people who aren’t familiar with the fiery comediennes of the 1930’s and 40’s.

Her reactions, her line deliveries, everything she did was actually note perfect for the genre trying to be accomplished and the time period being emulated. Her performance created a kind of comedic duo out of herself and Harrison Ford, with Harrison being the straight man to most of her reactions and facial expressions.

I honestly think that the people who don’t enjoy Willie Scott as an Indy girl are watching the film with the wrong perspective. Watch it again expecting Willie to be Indy’s opposite, watch for the moments that play as comedic, and don’t compare her to Marion Ravenwood. Make these little changes in perspective and I honestly think that you’ll be seeing the film in a whole new way. Also, what kind of a movie would we have on our hands if there was no conflict between our leading man and woman? Say what you want about Willie Scott, but don’t call her weak. She might scream a lot, she might complain, but she doesn’t let Indiana push her around and she certainly doesn’t keep quiet when she’s told to. She’s got gumption, and in her own way, she’s a rebel.

I also think that Willie Scott has become the scapegoat for people who don’t like the film as a whole. It got very negative reviews from critics upon its release. But Capshaw/Willie can’t possibly take the blame for that. The person to blame there would be George Lucas who chose the Kali cult as the subject matter and who Steven Spielberg said made the choice to make it the darkest of the three films. It’s the second act downer, the way that, “The Empire Strikes Back” was the darkest of the Star Wars films. Even Spielberg is on the record saying it’s his least favorite of all the Indy films. (Which kind of bums me out.)

Capshaw talks about taking some of that criticism in the documentary about the making of the film, “The other thing they didn’t like was the portrayal of the female…here I am being called on the carpet for creating this female that was stereotypically not a feminist, with her fingernails and her this and her that and her whining and complaining and screaming. I couldn’t have had more fun doing it. I just said, we’re making an adventure movie, we’re telling a tall tale.”

If you watch Martha Raye in, “Monsieur Verdoux” or even Eve Arden in, “Cover Girl”, you’ll understand just how perfectly Kate Capshaw nailed that sassy 1930’s personae. As a matter of fact, I think we’re sorely lacking in sassy dames onscreen nowadays. Many action heroines have a new type of quiet strength, but I’d like to see some more Marion Ravenwoods or Willie Scotts running around in film and television today.

For further scientific study of the origins of the sassy dame, please watch Katherine Hepburn in, “The Philadelphia Story”. Much like Willie Scott, Hepburn’s character, Tracy, may not have it all together, but she’s still strong-willed and as Chris Farley would say, “doesn’t take no crap from nobody”.

To be fair, “Temple of Doom” was my favorite Indiana Jones film growing up. Why? Because it’s the only one we owned, and I practically wore the VHS tape out by playing it over and over again. But maybe that nostalgia has given me a better appreciation for a misunderstood adventure classic. It’s not the worst of the Indy films; it’s just the most divergent in tone.

I beg of you, please give Willie Scott another chance to make an impression on you. Watch with a little compassion, expect some humor and employ a different perspective, and I think you’ll grow to love Willie Scott just as much as I do. It’s a classic role, and one that Kate Capshaw doesn’t get nearly enough credit for creating. Thanks to her, we now have a comedic entry into the canon of female action heroines. That’s nothing for anybody to apologize for or justify, it’s something to be appreciated. Like it or not, I say she deserves a spot as one of our all time best action heroines.

Now...let the flame wars begin! But first...enjoy the best opening title sequence EVER.