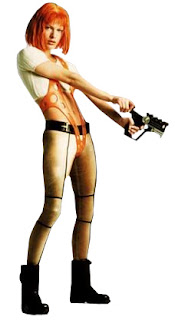 I want to attempt to explain why Milla Jovoich wearing little more than a few Ace bandages in the sci-fi favorite, The Fifth Element is not offensive to some lady geeks. But many women in music videos, often wearing more clothing, are.

Disclaimer: I don't claim to speak for the entire movie geek community, and I don't claim to be speaking for all feminists either. I'm kind of a middle-grounder when it comes to both films and feminism. Not that I'm lukewarm in my thoughts. But, there are movies that I like that would get me shunned by my fellow movie geeks, and there are opinions I have that would whip many from the feminist community into a frenzy. So I'm really uncomfortable with the idea of representing anyone but myself. Moving along...

Milla Jovovich is a bonafied lady geek mascot. At least, she is to me. She appears in more action films than probably any other actress or character on my list at this blog. Whether you like any of them or not is beside the point. Jovovich consistently performs as an action heroine, in fact, you could easily call it her specialty. But it all began with Luc Besson's exquisite science fiction adventure film, The Fifth Element. One could argue that visually it's a bit dated now, but to me, that's part of the charm. The explosion of color, the use of puppetry and costumes, and the fact that it manages to look nothing like Star Wars really sets it apart for me. (Also, is it just me, or is Ruby Rhod the prototype for Perez Hilton?) Long story short, it's a great film.

Jovovich plays the character of Leeloo in the movie, a perfect being created by aliens to save the world. And if you want proof that this character is big on the lady geek scene, just Google image her. There have been a stunning amount of replica costumes crafted by fans, usually for conventions like Comic-Con. The frequency of its appearance was even spoofed on the most recent Halloween episode of The Office thanks to the brilliance of Mindy Kaling. (If I could get away with the outfit, I definitely would. But I can't. Consider my restraint a free gift.)

When Leeloo first appears in the film, we see her being generated by a machine that can recraft an entire human being from a single strand of DNA. After her body is fully constructed, bandages are placed over her in her nakedness. Now, it's this scene where a lot of feminist critics take issue. Why? Because the costume crafted, albeit artistically and in a design-conscious way, is also obviously for the purpose of showcasing Jovovich's body. Case in point... 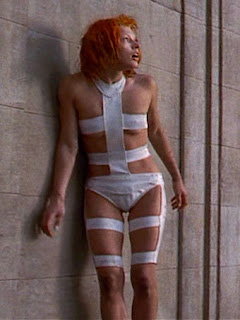 Now, first of all, there's the bathing suit argument. She's wearing more than what most women wear to the beach nowadays. But that's not why her outfit doesn't bother me. It doesn't bother me because of who the character is underneath that outfit. It's not the appearance of a woman's body that could ever be considered innately offensive. If that were true, then everything in nature should be considered shameful along with it. A woman's body is a natural and beautiful sight under all circumstances.

It's what Jovovich isn't made to do that makes the costume okay. She doesn't wink at the camera, doesn't arch her back suggestively or look lustfully into the camera. It's quite the opposite. It's the absence of the sexual actions within the scenes that include the costume that make's the appearance of the costume perfectly acceptable.

When she does act, it's from a place of strength. She breaks through walls and walks on the edges of a building, makes a great leap, and just generally ignores anyone in her path. As a character, she's completely innocent, though not naive. That, to me, is a well written and complex character.

The issue at hand is exploitation. This is where the opinions begin to splinter. What constitutes exploitation of a woman's body on film? This question matters because this is a regular battle ground for women like me, who find most action heroines of film to be empowering and not exploitative.

To me, exploitation begins with intent, but doesn't end there. Did Luc Besson intend for people to enjoy the sight of Milla Jovovich's body in that costume? Sure. Of course. But did he intend to make her purely an object to be viewed, objectified, or only used for a man's pleasure? No way. There's a character in that costume, and if viewers ignore that, no matter what their agenda, then they are also the ones guilty of objectifying the character and the actress. (I know, I have italics fever...but I love them so for their emphatical power!)

Just to play devil's advocate, because I think it never hurts to try to understand your opponent, I'll make the caveat that okay...you could argue that it's problematic to create a character and label her the "perfect" woman. How will young girls who watch that and don't look like Milla Jovovich (98% of us) respond to that?
BUT, I don't want to play devil's advocate. I want to say that every filmmaker, writer, actress, artist and costume designer on the planet can make whatever artistic choices they see fit all day long and answer to no man. (Yes, even the ones I don't like.) I want to point out that this film came out when I was a freshman in high school and it made me connect with the possibility of female power in a completely new way. It was the woman out to save the world in this movie. Sure she needed a little help, but so did Rambo and the Terminator. Fair is fair, right?


So where do the music videos come into play? Well, I just watched the new Justin Timberlake/Timbaland music video today. I just ran into it on the internet and watched. I don't have MTV and sometimes I wonder what "kids today" are watching. (Psst, that was a joke about me being old. Get it?)

The song is called, "Carry Out" and makes parallels to women's bodies as carry out food. The video has a flood of imagery that I personally would lump into the category of objectification. Women making eyes at the camera, multiple women dressed in lingerie and hanging over one man, women eating food suggestively, women putting their fingers in their mouths, dancing in a way that would shock your grandma, bending over, you know the drill. The women in the video are simply present to titillate, what one can only presume, are the straight male senses. Nothing new, it's called "eye candy". Oh look...another food metaphor... 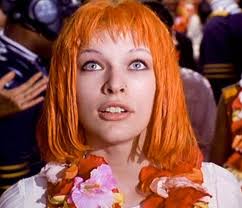 I know I sound like an uptight snob. I really do. For the record, I am not pro-censorship or anti-beautiful women. Am I shocked by videos? No. Am I personally offended by them? No, they honestly don't affect me. But I bring this up to hold one artifact up against another. To try to create a line where people can differentiate why we, women who love action heroines, don't see our favorite female movie characters as offensive in any way, but can still be irked by Playboy or music videos. Not from some kind of judgement seat, but from a place of differentiation. A place where character and intent matter. A place where people can begin to understand why Leeloo from The Fifth Element is completely different than the monthly centerfold. I guess I'm being so careful with my words because I often get accused of being a hypocrite. How can someone who likes Tomb Raider cast a dissaproving eye on suggestive videos?

A strong female character can still be a symbol of strength because of who she is within the context of a film, scantily clad, drop dead gorgeous or not. Beauty or the amount of skin exposed doesn't negate strength. But the women who end up in music videos and girly magazines have no character to speak of, they are there strictly to entertain the viewer with their appearance only. I'm not judging anyone who likes videos or the women in the videos either, I'm just trying to prove a point here. And that point is, there's a difference. If not to you, to us...okay, I'll be brave. To me.

Plus...to put it in a simpler vocabulary, Milla Jovovich absolutely rocks. Am I right? I can't tell you how many times I've played this scene over and over, especially back in high school. In fact, once I rigged up my own editing system using two VCR's and cut together a reel of my favorite scenes from movies where women were the heroes. This shouldn't surprise you, but the following scene made the cut.

If you've never seen the movie, just don't worry about context. Otherwise your brain may ache a little. "But why is she punching monsters, and who's that nice blue lady?" Doesn't matter. Watch this first, enjoy the sight of a David and Goliath style battle, and then go rent the film.


If you enjoyed the clip and you're new to action heroines, you may want to visit this entry to get started...also, I would highly recommend a trip to your local Comic Book shop.
Posted by Audrey Brown at 11:05 AM