Fiona of "Burn Notice" in the episode, "Where There's Smoke" 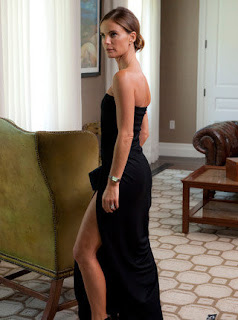 Last night's episode of Burn Notice proves that writers (and Gabrielle Anwar) are paying attention to the character development of the show's resident action heroine, Fiona. It also had me squealing with delight, taking me to some frantic heights of fangirl joy that I haven't been to in a long time. Because last night's episode was all about Fiona, and we haven't had very many of those. But when we get them, they're oh so good. (For example, I can tell I'm hard core geeking out about something when I want to start dressing like the character, which sent me right to this website to look for goodies like Fiona's trademark leather pouch belt and other accessories.)

When the show began four seasons ago, Fiona didn't feel very real. In all fairness, all of the characters were two-dimensional in the beginning. That's what a pilot is for. To give a network and a viewing public a rough sketch, a concentrated version of the characters and the plot that will catch their interest and ink the show a deal.

For the first season, Fiona was written as a character who was only around to chase Michael as a love interest. But as the seasons have progressed, Fiona herself has set up shop in Miami as a security expert, and yes...an illegal arms dealer. She has her own apartment, her own contacts, and her own operation. She's full of interesting contradictions and provides us with regular butt-kickings that would make even Milla Jovovich flinch. She's tough, she's sassy, she's written perfectly for geeks like me who go to the comic book store and just scout for the female driven books. (Sirens of Gotham, for example.)

Last night's episode, "Where There's Smoke" was a big developmental leap for Fiona's character. (I realize that I'm approaching my thoughts from a writer's point-of-view because, well...I'm a writer.)

First of all, the episode was a lot of fun. Bruce Campbell had more of a presence in the episode, which I enjoy a great deal. His character started out as a fully retired, inactive, cocktail drinking contact and has since become an irreplaceable member of "the team". Seeing as how I bleed geek, more Bruce Campbell in anything is always good. Nay, great. The dynamic that the writers have created for his character and Fiona is a fun one that I never get tired of seeing and I'd like to see them take a shine to each other more than they have in the past. With Sam's seemingly newfound respect for Fiona in last night's episode, maybe we can see a new dynamic emerge between them. (Of course, I may be projecting just  tad...love me Bruce Campbell!)

But back to Fiona. Last night, Fiona had one line that, I think, fully encompassed why female viewers everywhere love not only the show, but her character in particular. A line fully representative of what Fiona's character stands for. She said, "Sometimes you have to be your own white knight." And last night, she was. She rescued herself, though Sam did play into the situation as back-up. Not only did she rescue herself, she also sacrificed herself in the beginning of the episode in order to keep someone else safe. Because she had confidence that she could take on the "bad guys", no matter what situation they put her in. And she was right.

Part of the joy of watching her character in general and last night's episode in specific is that every week we get to enjoy a sort of reverse Cinderella story. Fiona is a dangerous character, well educated in self-defense, and able to play on people's perceptions of her and use that as a weapon. In short, we LOVE to watch her lie in wait, pretending to be a weak little girl when in reality she is a serious threat that can take down any villain, basically anytime she wants. There was a similar thrill to the show, "Buffy the Vampire Slayer". It's the role reversal that's so much fun to see. She's the woman we'd love to become.

The writers are so smart too, because Michael didn't save Fiona last night. He helped. He was concerned (which keeps the romantic tension between the two alive), but she did it all herself.

Also, how great was the, "My name's not Charlotte!" moment? There was something so adrenaline-pounding about that scene in the end where Fiona finally revealed herself to be a real danger. That scene with Sam and Fiona taking down the bad guys has been by far my favorite this season. My husband and I just looked at each other with delight, like it was Christmas morning for us TV geeks. It's the kind of thrill you'd expect from a blockbuster.

This is why, "Burn Notice" is so successful. An action heroine every week. Bruce Campbell every week. Fun spy technology. It's all fun all the time on this show, and the writers and actors have proven time and again that they know how to write an action heroine into the story in a believable way that continues to deliver and build a strong female character that grows and lasts. (Someone should take away my ability to italicize.)

Don't be surprised if, "Where There's Smoke" becomes a fan favorite, particularly among female viewers.

There seems to be waves or trends on the action heroine scene, and between "Burn Notice" starting up again and, "SALT" coming out last weekend, the latest trend to me is that action heroines have become so much more acceptable and influential in film and television than they used to be. There's a wider variety now than there ever used to be, and I can only hope that it's a trend that continues. I feel like if fangirls unite and keep watching the shows and seeing the movies that deliver the great action heroines, or heck, any action heroines at all, the entertainment industry will keep them coming.

Have you been watching, "Burn Notice"? What do you think of Fiona? Personally, last night's episode moved her into "classic action heroine" status forever in my book. Thoughts? Anyone else wanna be Fiona when they grow up?
Posted by Audrey Brown at 10:49 AM