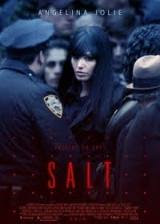 A girlfriend and I went to see, “SALT” this week. We’ve both been looking forward to it all summer, so it only seemed fitting to leave the husbands and kids at home and go watch a good-old-fashioned action movie.
“SALT” delivered in every category that we’ve come to love and hope for in an Angelina Jolie action movie. She’s tough, she’s believable, and this time saving the world has nothing to do with her gender. In fact, Jolie can not only be thanked for jump-starting the action heroine franchise a decade ago with, "Tomb Raider", but she's almost making up for missed action heroine opportunities of decades past with this espionage thriller. (Spoilers throughout…)
You probably know that the original script for, “SALT” was written for Tom Cruise, who then turned it down feeling that it was too similar to his Mission Impossible role. Well, the studio then turned to Jolie who played the part originally written for a man with note perfect clarity.

As we left the theater, my friend and I talked about how nice it was to see an action movie starring a woman that had virtually nothing to do with the fact that she was a woman. She never seduced anyone for secrets. She never used her appearance or looks to get anything done and she also never had to take on any maternal roles over the course of the movie. She was just a spy. Not a sexy spy, not a Bond girl, just a spy. 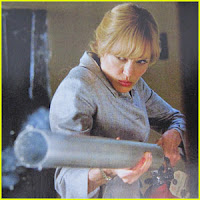 Conspicuously missing from the film were cutaway scenes seen in the trailer of Jolie in her underwear with a man. I can only assume that these were scenes we would've seen before the opening of the movie where Salt is being tortured in her underwear in a North Korean prison. Whoever decided to cut them out, thank you, it was a nice change of pace.
Which goes to show just how far we’ve come in the decade since Jolie’s first action flick, “Tomb Raider” was released, when sexy absolutely had to be a part of the equation in order to make bank at the box office. Of course, Angelina Jolie is a beautiful woman, so no matter what is written in the script, I’m sure her appearance is a draw. What I mean when I say that sexy isn’t a part of the equation in this film is that we have no half-naked shower scenes. Nothing shot for the sole purpose of putting her body on display as an artifact. Again, and I feel like a broken record, not that there’s anything wrong with that. It just gets old if you’re a female viewer who loves action heroines to have to put up with the femme fatale stereotype. We want variety in our female characters. Salt is a happily married woman no longer interested in playing the field, and that's a unique character choice for a lot of action heroes in film, be they male or female.
“SALT” could’ve belonged in another time and place. With the nuclear threat/assassination plot line, it could’ve been lifted right out of the early nineties or a Jack Ryan story. Which might sound like a drawback, but was in fact for me, a big bonus. We’re used to seeing male superspies saving the world from clandestine bad guys. From Bruce Willis to Tom Cruise to Arnold Shwarzenegger to Matt Damon and on and on the list could go. We have years worth of male lead action films. Again, nothing wrong with that at all.
But in most female-lead action films, there has to be a twist involving gender. Sometimes this is novel and well thought out, such as Tarantino’s psychologically in-depth look at a mother gone haywire with grief in, “Kill Bill”. Sometimes it’s fetishistic and clearly just there for the male gaze, as in “Ultraviolet”, and sometimes it’s a mix of both, “The Long Kiss Goodnight”. I don’t necessarily think there’s anything wrong with any of those choices.
But in, “SALT”, we have a truly unique story that does something different not only in the script, by barely making any mention of the fact that the lead character is a woman, but it also does something very different visually. Jolie’s character becomes less feminine as the movie goes forward. In the final scenes of the film, Jolie’s trademark long hair is cut off, completely gone and shaped into a modern male hairstyle. She has no makeup on. (Correction, she’s made up to look like she has no makeup on, but you take my meaning.) Her clothing is men’s clothing, not designed to show off her female curves. Her gender becomes neutralized visually, as the plot takes her to the White House disguised as a male.

Now, apart from some hilarious visuals my friend and I conjured up imagining Tom Cruise sneaking into the White House in a ball gown, this plot point is a great example of why the movie was so refreshing for this female viewer. They could’ve changed the script to make it more suited to Jolie’s sex appeal. They could’ve had her sneak in as a secretary to a diplomat in a smart suit and chic fake glasses. They could’ve made a million cliché choices visually. Instead, they kept the part in the script where she sneaks in as a man, which was not only surprising for an audience, but also made the most sense story-wise. If they’re looking for a woman, they’d never think twice about trying to find her in a man’s clothing. Not since Nightcrawler's breathtaking invasion of the White House in, "X-Men: United" has there been a more fun, "Let's watch some creative espionage." scene.
Of course, the symbolic interpretations of this scene are endless. Does a woman in an action film have to act male to be tough? Does she have become gender neutral to be taken seriously? These are questions feminist critics everywhere will tackle. And I’ll let them. My main point about, “SALT” is that it’s not a film for men or women, it’s a film for both and a movie that shirks off the clichés we’ve come to expect. And that’s a nice change of pace.
My final thoughts on the film, the lasting impressions that have stuck with me in the days since seeing it, have been of the large action set-pieces at the beginning of the story. Watching Angelina Jolie do what she does best, jumping from tuck to truck in a traffic jam, speeding off on a motorcycle, killing bad guys, and yes…saving the world. It’s also left me with a serious desire to cut bangs as soon as possible. But that’s beside the point.
Was this movie the most interesting one I’ve ever seen or the most creative in this genre? Admittedly, no. But I can’t tell you how exciting it was, after seeing the massive shift in the action heroine consciousness over the last decade, to be able to say that I went and saw a run-of-the-mill, standard, fun, explosive action flick starring a woman. It’s such a gift for me and my girlfriends to be able to go to the movies together and take in a female-lead action movie.
I don’t think I’ll ever get tired of that. In fact, I know I won’t.
I don’t know if Jolie is staying away from the, “Tomb Raider” franchise on purpose. If the studio is avoiding it because the second film flopped. But that’s all Jan De Bont’s (the director) fault. This movie, more than any other she’s made since the last Tomb Raider, just makes me wish that they could, or would, get the Tomb Raider franchise out of development hell and crank out another one . It’s a fun franchise with endless adventure potential, one that can easily be saved with a better script, and one that’s just aching for another sequel with Jolie.
Seeing what she’s capable of in the genre only serves as a reminder that they should give Tomb Raider one more chance.
Posted by Audrey Brown at 11:45 AM