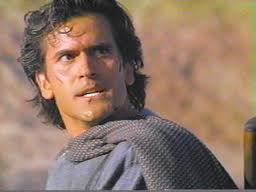 Took a quick break last night from analyzing action heroines and turned my attention briefly to a few action heroes.

I thought it might be nice to take a break from some of the hate mail I've been getting since my opinion on Leia's bikini in geek culture appeared on a couple of websites last week. Simmer down everybody...simmer down...that's the one thing I hate about being a writer sometimes. If people read a contrary opinion, they automatically assume that you are personally attacking or insulting them. The great irony is that it's totally counter-intuitive to feminism for women to be telling other women to just shut up and not speak their mind on something...about feminism. Come on ladies, can't we all just get along? You can disagree with someone and still get along you know.