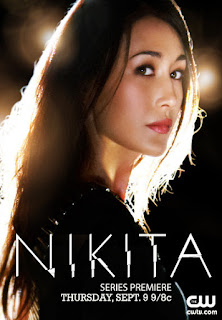 The reviews are coming in for the CW's new action-heroine based series, "Nikita" based on Luc Besson's original film, "La Femme Nikita". The reviews are essentially in agreement that the show doesn't offer us anything fresh and only delivers cliches. (This AintItCool.com article just about sums it up.)

That got me thinking, are action heroines over-exposed right now? Did they become too popular, will there be a down shift in their appearances? (Was the cancellation of Joss Whedone's, "Dollhouse" last year the first sign of things to come?)

Probably. But believe it or not, that's good for the genre. Because that means someone, somewhere, will have to do something fresh with the action-heroine genre. Prepare yourselves fangirls, we may hit a lull.

Not just yet, but maybe sometime over the next five years or so. People may become so sick of seeing them that they disappear for a while, genres are known to ebb and flow like that. Before the success of Peter Jackson's LOTR trilogy, you couldn't find a new fantasy movie that wasn't hilariously bad quality, no matter how hard you tried. The last time when that genre was popular was the 1980's with films like, "Willow". But then it hit a lull. Until Jackson reinvented the genre with his years-long, highly stylized, technically advanced version of fantasy.

But remember, TV shows, in particular, take time to develop. If you watch the first season of, "Buffy the Vampire Slayer", it's a hollow shell of it's future self. And audiences have become far more fickle than they were when Buffy premiered in 1997. Networks also edit their schedules far more harshly and much more quickly.

So what do you think, will you give "Nikita" a chance? Will it survive? Is it a cultural harbinger of a near-future dry spell? Or will the newly intense emphasis of comic books in modern pop culture keep action heroines alive in strong numbers in film and television?

I may not even watch the show, just for reason of time constraints, as I pretty much have zero of that thing called time right now to watch any television while finishing my thesis, except the occasional rerun of, "The Office" at bedtime. But I'm curious to see how this all goes down...
Posted by Audrey Brown at 9:00 AM