Feminism in Comic Books: Setting Female Characters Back or Pushing Them Forward?

It's been one of those synchronous days for me, where comic books and feminism are meshing. I got an email from another blogger who writes about action heroines wanting to talk shop. (My Leading Lady) In the same hour, Dr. Mix, a professor at the college where I teach wanted to pick my brain on some comic-related issues. It's a good day when anyone wants to talk to me about comics, let alone a Doctor and a fellow blogger. So there must be something in the air.

Dr. Mix wanted to know if I had any recommendations for comics to consider teaching to an honors undergraduate class, comics that might say something specific about American culture. Of course, I recommended Gaiman's "1602", which is a "what if" scenario with the X-Men. But naturally, my mind drifts toward feminist topics in comics, of which there are no shortage in the critical world.

I want to say right away that there are convincing arguments on both sides of the idea of feminism in comics. (The same can be said of film.) Action heroines can probably be said to be equal parts empowering and equal parts destructive to viewers. It all depends upon who is watching, why they are watching, what they are watching/reading, etc. There are too many factors to ever say definitively that action heroines are ultimately good or bad. (Though if you know me and you read this blog, you know that I believe that are ultimately opportunities for the forces for good in the pop culture sphere.)

So I started telling Dr. Mix some of my philosophies of feminism in comics.

1. Comics spring from pulp fiction, in which most female characters were being victimized in some way. (Usually sexually.) So to go from pulp fiction to comic books was a pretty great move for female characters in pop culture. It was a step up, for sure. So though it's sometimes disconcerting to see covers from the 50's (or present day) where Wonder Woman has been taken captive and she's in some kind of lusty pose and only Batman or Superman can save her...back then, it was a natural moment of growth. So we've retained some of those images and had them passed along, like in a game of telephone. Also, action heroines, just like action heroes, are always in some kind of trouble. So we have to look at every image in context. 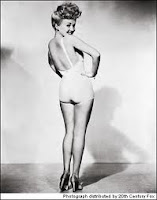 2. However, by today's standards, it starts to seem ridiculous to us to constantly see action heroines saving the day in pantyhose and little else. It can be frustrating. Some costumes are clearly just there to work as eye candy. (Though not all are impractical, Catwoman dresses fairly practically for bouncing around rooftops without having clothing get snagged on corners and what-not.) Not that there's anything wrong with beauty. But you get my drift...who could really save the day in a leotard? Again, the flip of that is that the men wear some pretty ridiculous outfits too. So, fair is fair. But most of the female characters are dressed far more scantily. Typically in the style of what was attractive for entertainers to wear in the 1950's, a la the shape of Betty Grable's famous pin-up outfit.

3. Also, can we argue that there are truly any strong female American action heroines in comic books? (Surely there are plenty on the indie scene.) What I mean is that a lot of figures of female strength on film and in literature have to be born of their strength through trauma. Whereas, many male figures can simply decide to take up a cause and then become strong in order to live that out. Most female action heroines are orphaned, traumatized, isolated, attacked in their youth, etc. This is a tradition that dates all the way back to Puritan times, when in order to write a female-centric adventure and not offend the powers that be, there had to be an excuse for the leading lady to go on the adventure. (Being kidnapped by Indians, shipwrecked, etc. Explored more in depth HERE.) But when it comes to popular comics, let's take a look at the female figures of power and how they might be accidentally carrying that tradition of trauma with them.

a. Wonder Woman - From an isolated island of Amazon women. America's hero, but not, ultimately, an American. She wears the American flag, essentially, but she has an exotic appeal with her Amazon heritage. This exotic appeal is repeated in many action heroines of comic books.

b. She Hulk - Biologically altered, there is something "wrong" with her. Her strength is freakish.

e. Elektra - Greek figure of power, almost mythical. Again, not a traditional American, built upon that same "exotic" foreigner appeal. (A tradition dating all the way back to the artist Josephine Baker, who used this idea of "exoticism" to profit off of curious American audiences.)

f. Rogue - Definitively American, from a poor/middle-class Louisiana background, has strength that keeps her separated from any kind of personal life or family future at all.

g. Jean Grey - Arguably weak, only at her most powerful when possessed and somewhat "evil" in behavior.

h. Catwoman - Not super powered, often considered Batman's female counterpart...but not really. She's a thief, a bad guy. She is strong, but uses her strength for selfish gain.

i. Batgirl - Admittedly, a little wimpy...always "in training", sometimes just there as Robin's girlfriend. (Also, the implications of Batman being the Dark Knight, and this was Dr. Mix's point, automatically create an antithesis for the female characters. They must be damsels or villains to play opposite the knight mythology. Harley Quinn is desperate for love, Poison Ivy is a cold man-hater, etc.)

j. Sue Storm - Her power is disappearing. Talk about feminist implications. Sue is often portrayed as the weakest of the Fantastic Four and is frequently left separated from society by her powers. But in all fairness, so are the Thing and Superman and every super action hero or heroine...

I could go on and on, but are you seeing a pattern start to emerge? There are so many qualifiers for action heroines...

Have we ever seen a truly unique, empowered, non-internally tortured, not formed by trauma, not freakish action heroine in comic books? Surely I'm missing several on the indie scene. Buffy would probably count...but do you see how all of the mainstream action heroines from the most popular books are still born of their 1950's post-pulp roots?

Not that I care of course. I still read and love these comics. I'm not arguing against any of their strength. But it's interesting to take a look at the lack of diversity in female action heroines and the way that their origin stories have to be so similar, like we have to create an excuse for a woman to become strong instead of the fact that male characters (The Green Hornet, Batman, etc.) can choose to be strong.

Does that make sense?

Again, I'm not arguing for one point or the other. But there are some uniquely American traditions forming in comic books specifically regarding action heroines, and we can see those traditions springing from patterns. Examine the patterns, look at the way that they have emerged from history, and then ask yourself, what would a more diverse range of origin stories for action heroines in comic books look like?

What do you think?