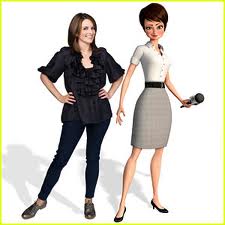 We recently saw Megamind. The movie as a whole was fun and made me laugh. (Of course, the mere sound of David Cross saying anything at all usually makes me laugh.) But I confess that the biggest reason I went to see it was for Tina Fey.

I'm a total geek for Fey. I love 30 ROCK, she owned SNL, I can't wait for her book of essays, and I tend to ramble on hopelessly about how cool she is in a generally incoherent manner a lot. I sort of lose my words when I try to explain how cool I think she is. You should've seen me watching her get the Mark Twain prize for Humor at the Kennedy Center the other night...it was kind of pathetic. I'm surprised the neighbors didn't bang on the floors, I was laughing so loud at her speech.

I wouldn't exactly say her character Roxanne Ritchie, a hard-nosed reporter, is an action heroine per say. She's more like an intelligence heroine. She doesn't flinch when faced with cliche dangers inflicted upon her by a half-wit super villain, and even though she has no super powers of her own, she's the character that takes the most effective action throughout the story. She's the brains of the operation, for sure. The smarts without the ego, the person actually trying to solve the problem.

But it wasn't even her actual character that I found myself thinking about after seeing the movie. I found myself thinking about Lois Lane. Of course, the entire concept of Megamind is built around the Superman mythology. An alien baby blasted into space when his planet destructs uses his superpowers to protect his new home on planet Earth. It's just that this time, there are two alien babies and one is kind of a loser. (That would be Will Ferrell's character, Megamind.)


But Ritchie sort of stands in for the Lois Lane character. The reporter with an edge who worships the hero who saves the day, not so much because of how she feels about him, but because of what he stands for and the way he offers her consistent opportunities to get a good story. 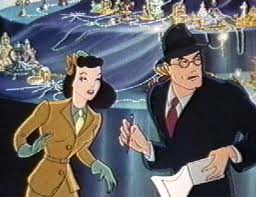 When I was little, my mom made sure I had some of the original Superman cartoons from the 1940's around the house. And let me tell you, the Lois Lane from my childhood in the earliest Superman cartoons was not only different, she was barely sympathetic. The Lois Lane of Smallville, and even Margot Kidder's movie portrayal, is far more likable than the original Lois of the early cartoons and comics.

Lois Lane was a breakthrough character for several reasons. For one thing, she wasn't a homemaker, a teacher, a nurse or a seamstress. It wasn't that long ago that women were only really allowed to do a handful of jobs and be considered respectable. There's not a thing in the world wrong with any of the above professions, but they were once the only real options for women. Lois Lane worked in what was still a man's world in the first half of the 20th century...journalism. So her character had to be tough and defiant, at times downright ruthless, in order to keep her career intact.

Lois was constantly stepping on Clark Kent to steal his stories and opportunities, and that's part of what made Superman seem so heroic. When the viewers wanted her to get what she deserved for, oh say...beating Kent to the punch by jumping in a cable car to the top of an erupting volcano to get a story before him, Superman saved her anyway even though she brought the danger upon herself.

It may be hard to believe now, but Lois was once a villain. Which was great.

True, it put her into the role of something of a stereotype. The femme fatale with a bit less "fatale". But still, even though she was in constant danger, she wasn't a wilting flower either. She took risks, she worked hard, she did a job that back then was less socially acceptable, though it was certainly getting better (slowly) for women in the workforce every day.

The great thing about the character of Roxanne Ritchie is that she shows that female leads don't have to be pushed into stereotypes to be believable anymore the way they once did. Tina Fey brings some of her trademark sass and nerdiness to the role, but Ritchie is sort of the only sane person we get to ground us in the movie. A woman doesn't have to be a villain to be believably tough anymore. Now I know, I know...it's just a CGI movie for kids. But the more strong female leads we get to see, the more strong female leads meant for children, the better.

Geena Davis has even started an organization called "SEE JANE" devoted to expanding the portrayals of strong women in children's media. And who better than to do it than one of our greatest action heroines ever onscreen?

So here's to Tina Fey, Roxanne Ritchie, Lois Lane, and the incomparable Geena Davis! Because really...can more strong women in the media possibly be bad?

Watch a brief clip of Davis speaking at a benefit for See Jane below...