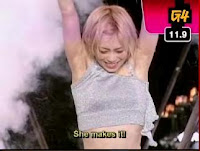 So, I'm a huge Ninja Warrior junkie. I could (and frequently do) watch the show for hours. The TV show, also known as "Sasuke", is a Japanese TV show that now airs on cable network G4 and has resulted in several American spin-offs. (Some comical and not officially tied to the franchise such as "Wipeout" and some directly tied to the show like "American Ninja Warrior" that sends the winning competitors to Japan to compete on Sasuke's legendary obstacle course.


If you've never seen it, here's an example of what it looks like...

Allow me to play devil's advocate for myself here right off the bat. If you're the type of person to be looking for feminist-friendly content (See: Shows that treat women with a modicum of respect.) then keeping G4 on all day long is inevitably going to make you angry. I mean, good luck finding any television channel that offers feminist-friendly content. (Or racism-free programming, or politically unbiased news coverage, etc.) That's just the world we live in. So I realize that I watch TV at my own risk, and anything I say in this article is not a formal complaint against the network that offers lots of fun programming. Now I'm done being politically correct...

So, that's out of the way. Now let me just say to G4, and every other network on the face of the planet, there are more people who want to watch your content than just twelve-year-old boys. Right off the bat, sex appeal is a huge part of the network, you can tell by some of the promos and a lot of the commercials, sex sells, and it's all over this network. Not that there's anything wrong with a beautiful woman, but let me give you an example of how some of the selling of female sexuality can turn a viewer like me away.

I was watching, "Women of Ninja Warrior" yesterday. Yes, the show is sometimes funny and a lot of the participants know that. But the English-speaking promo scripts were just plain grossing me out. Once before a commercial break, one of the announcers said, "Can any of these women prove they're more than a pretty face? Find out when we return." Annoying.

So, that's what the women are competing for? To prove they're more than a pretty face? I don't think so. There's no equivalent that gets said about the male competitors. They don't say, "Can any of these men prove that they're more than a handsome face?" No. It just isn't mentioned, because male sexuality isn't a part of the competition, it's not even factored in. So why is it automatically included in the promo scripts for the women?

Then later, before another break, the announcer said that a former beauty queen would be competing. He teased that whether she made it across the course or not, viewers should come back to see what happens, especially because you had the chance to see her soaking wet. Har, har. Get it? 'Cause you might see her bra. Again...that's just gross.

It kind of went on from there, obnoxious junior high comment after obnoxious junior high comment. The worst part is that because the added commentary was in English, the contestants probably have no idea to this day that some American writers were making these leering and smarmy statements about them. I'm sure that legally, it's all good. And I know most people will tell me I'm being too sensitive. But I get so tired of geek programming being so blatantly skewed toward young male audiences. And really, there's no excuse anymore. I don't really even think there's an illusion out there anymore that maintains the idea that geek culture is comprised mostly of men.

Yeah, I know. If I don't like it, change the channel. And I did. But I don't think I should have to. The real question here is, what century do we live in? Are the female Ninja Warrior contestants less worthy of respect just because they're women? Is it funnier somehow to make those comments because they're women? Do they deserve comments like that, comments that would be called sexual harassment in a workplace, just because they want to compete on the show?

I would love to have some kind of filter to watch stuff like this that would remove any comments that would induce eye-rolling or fist-shaking on my end. Then again, I guess that's what the mute button is for.

So, any other women out there that are obsessed with Ninja Warrior that get weary of "see through t-shirt" jokes and "pretty face" anecdotes? Or is it so common on channels like G4 that you just sort of gloss over it? Or do you think those comments are funny? I'd love to hear from people with varying opinions on the subject. 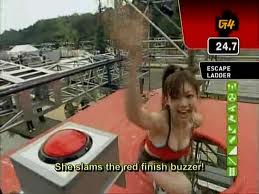 At any rate, I love the show, even if I hate some of the things that American producers do to make it more palatable to male audiences. (I guess that's what they're shooting for...I don't really know.)

I just went looking for a YouTube video of the Women of Ninja Warrior to embed as a finish to this post and the written comments and video titles are far worse than any of the comments I've heard on TV. Am I missing something about this show? Is it some epic creeper magnet that I just didn't know about?

What's your verdict? Is the show as empowering and exciting as I want it to be, is it constructed specifically to be creepy and I'm just not picking up on it, or some combination of both?

I like it, so I'm going to continue to watch it and try to just ignore the comments. It's like junior high, you don't let the immaturity of others ruin anything for you, you just pretend like they're not there. But I'd like to believe that we live in a world where we can advance past some of this someday soon, and that networks created specifically for geeks will eventually get on board with the fact that geeks come in all genders and ages and create some programming that won't drive me up the intellectual wall and maybe someday, G4 won't feel like it's run by "The Todd". (The oversexed and immature surgeon from, "Scrubs".)

I'll just keep on enjoying the inspirational runs these real-life action heroines make on the show. And you?
Posted by Audrey Brown at 11:42 AM